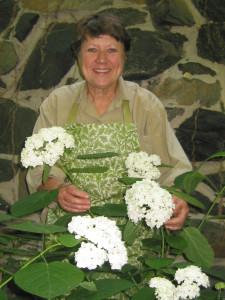 The Hortus Bulborum in Limmen maintains a specialized collection of historical spring-blooming bulbs and is supported in these efforts in great measure by its volunteers. Most of these come from Limmen and its surroundings. A few live a little further away.  And since a few months ago, the only garden of its kind in the world has an assistant in the USA. With her roots in the Kingdom of the Netherlands, Jane Baldwin-Gerlach recently joined the Hortus corps of volunteers.

A brief announcement on the website of the Hortus this past spring about an opportunity to help with English translation work for its website made Jane get in touch with the Hortus. By chance she was organizing a tour to the Netherlands in April for garden enthusiasts from the Baltimore, Maryland  region. In addition to Keukenhof and the bulb fields near Leiden the group also was scheduled to visit the Hortus, so here was the ideal opportunity to meet in person.  LL, a volunteer himself and author of the book about the Hortus, provided the group’s guided tour during the visit.  And so the first contacts were made.

The library
Not that it was strange that Jane would be drawn to the Hortus.Says LL:” Born as she was in what was then the Dutch East-Indies, she still has many connections with this country”.  After returning to the Netherlands she finished elementary school in Amsterdam and then emigrated with her family to the USA where she completed her high school and university education.  Jane decided on a library career and took her professional librarian training at the University of Michigan. Work took her to the University of Rochester (state of New York), Harvard, and North Carolina State University. It was at NCSU that she revived her interest in gardening, took university courses in horticulture and made the decision to change careers.  She has never looked back and has no regrets about the switch from the library to the garden. In the morning the fields were red and that evening the fields would be green, while there were piles of red, yellow or blue petals everywhere along the road.

Bulb Fields
When her husband was offered a position at Leiden University she came along. For the next six years, from 1979 to 1985. She thoroughly enjoyed her stay in Leiden and Oegstgeest. During that time she worked for Swets & Zeitlinger in Lisse, an academic publisher and subscription agency for libraries, where she was responsible for the customer service for the North America division.  She maintained contacts with libraries in the US and Canada which ordered subscriptions for European journals via Swets. Said Jane: “When I think back to that period I remember the daily bus rides (at that time line 50 Leiden-Haarlem) and the natural progress of the bulb fields throughout the year, the spreading of manure, the emergence of the flower heads, the bright colors and the heading of the flowers. Sometimes when I went to work in the morning the fields were red and that evening the fields would be green, while there were piles of red, yellow or blue petals everywhere along the road.  And I remember those men always walking along the rows of the fields, with their hands behind their back. Those are scenes which I will never forget.”

Hortus Bulborum
Now back in the US, Jane moved to Baltimore in 1993 where her career took a major turn. She began to volunteer with the Cylburn Arboretum Association, the Friends group of the local arboretum. Two years later she was invited to become the group’s President and she did not take long to accept the invitation. For twelve years she directed the group’s activities at the arboretum with fundraising, special events, public relations, gardening and teaching.  This past spring she stepped down as President in order to have more time for hobbies such as opera and travel.  But one passion did not change.  Her love for flowers and in particular Dutch bulbs never deserted her. “I am thrilled to be able to reconnect with my Dutch roots on behalf of the Hortus.” And the Hortus is very glad with this unexpected connection.
(November 5, 2007, by Leslie Leijenhorst)